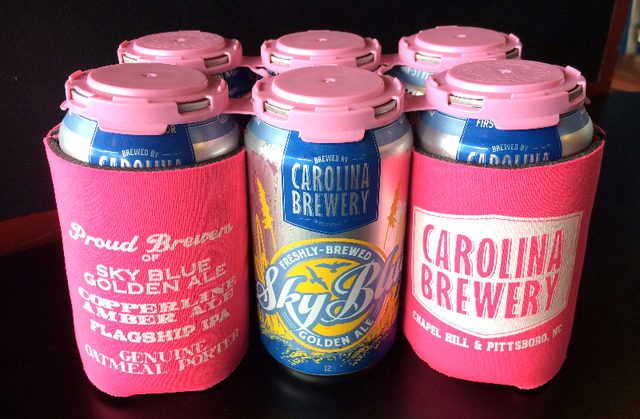 “Sky Blue Golden Ale is one of our most popular, flagship beers, and we’re thrilled to support breast cancer awareness and research through the inaugural ‘Sky Pink’ campaign,” said Robert Poitras, co-founder of Carolina Brewery. “We hope this will spark an annual tradition to look forward to each October, for many years to come.”

You can #DrinkSkyPink on draft at the original brewpub location – celebrating its 20th anniversary this year – or at the Pittsboro location and other participating restaurants. Or, pick up a six-pack with pink can tops at participating retail locations. The promotion kicks off October 1 with a “Pint Night” launch event at both brewpubs, featuring $1 pints of Sky Pink. Pint glasses, koozies and hats will be sold throughout the month, which will conclude with a donation to the Susan G. Komen NCTC Chapter at a check ceremony on November 10 at the Chapel Hill location.

And if you want to sweat and then sip, register for the Oktoberfest 5K Run at Mary Hayes Barber Holmes Park in Pittsboro. The race starts at 10:30 a.m. and is followed by beer, bratwurst, activities for kids, live music and more. A portion of the proceeds from race registration will benefit Susan G. Komen.

Posted in Out & About

Editorial intern Lily Stephens is a Georgia native studying journalism and studio art at UNC-Chapel Hill. When she isn’t writing or painting, she can usually be found wishfully browsing pet adoption sites in search of her first Dachshund puppy.