Going To The Chapel (Hill)

Heather Kileff and Robert Hutchins met on a blind date orchestrated by Susan Gravely and Bill Ross, friends of Heather’s family who were living in the house above UNC School of Medicine student Robert. (Susan also co-founded Hillsborough-based VIETRI.) The two were both surprised at how nicely they hit it off, and the rest is history. He proposed in Charlottesville, where Heather went to college and graduate school. The couple currently lives in San Francisco, where Robert is an internal medicine resident, and Heather works remotely in social media and marketing for VIETRI.

One Of A Kind

“Chapel Hill is where I grew up, where Robert went to undergrad and medical school, where we met and where we hope to move back eventually. The wedding’s location was an easy decision,” Heather says. “Despite all our years in Chapel Hill, neither of us had ever been to an event in the State Room at the Morehead Planetarium or to the DuBose House. We liked the idea of giving our local guests a Chapel Hill experience that they might not have yet had.”

“I highly recommend selecting vendors that you actually like personally,” Heather says. “You end up spending a good bit of time with each of them!” Nearly all of their vendors were located within the Triangle, including planners Ruth Ross and Karen Havighurst, hairstylist Rachel Radford of Ceremony Salon, Ply (for the custom invitations), Well Addressed Calligraphy, Carolina Livery (for transportation), The Catering Company of Chapel Hill, and Katie Corley of PopUp Workout, who taught a family and wedding party exercise class. 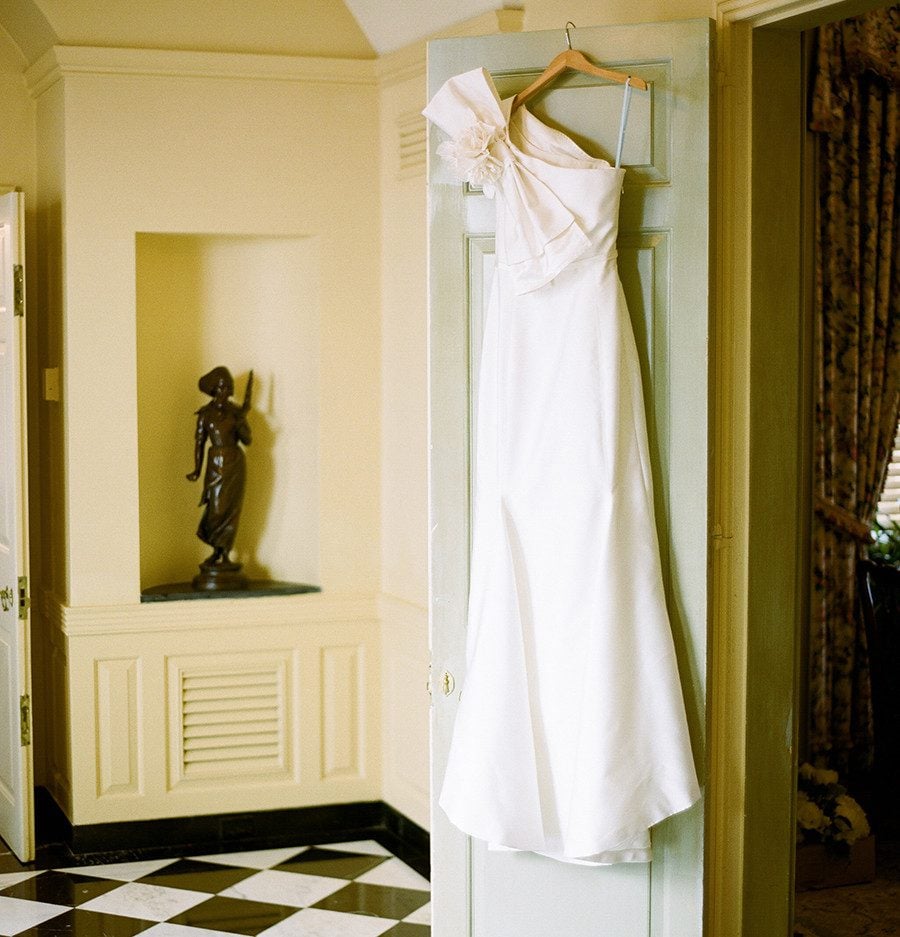 The couple was on the fence about a wedding videographer. “We decided to go for it, and we are so, so glad that we did,” Heather says. “The day goes by in a flash, and it’s so much fun to relive the day with voices and movement and music. Also, there are so many moments during the day that we would have completely missed had we not had someone doing video.”

While the Hutchins wedding is decidedly timeless, Heather didn’t let big day expectations bog her down. “I didn’t have a grand vision for every detail of the day,” she says, “but I later realized that if I just selected things that I liked all along the planning way, the style would be unified. Purely because it would be my style.” They added their own personal touches, too. “My niece Caroline carried the same little flower basket down the aisle that I carried at Susan Gravely’s wedding [who introduced the couple] and carried when I was a junior bridesmaid in my sister Holly’s wedding.”

“Girls grow up hearing that their wedding day is their day, but that idea always rubbed me the wrong way,” Heather says. “A wedding is about so much more than the bride. It’s about the groom, the parents, the siblings and the friends and family who have kindly enough decided to spend their day celebrating with you.” 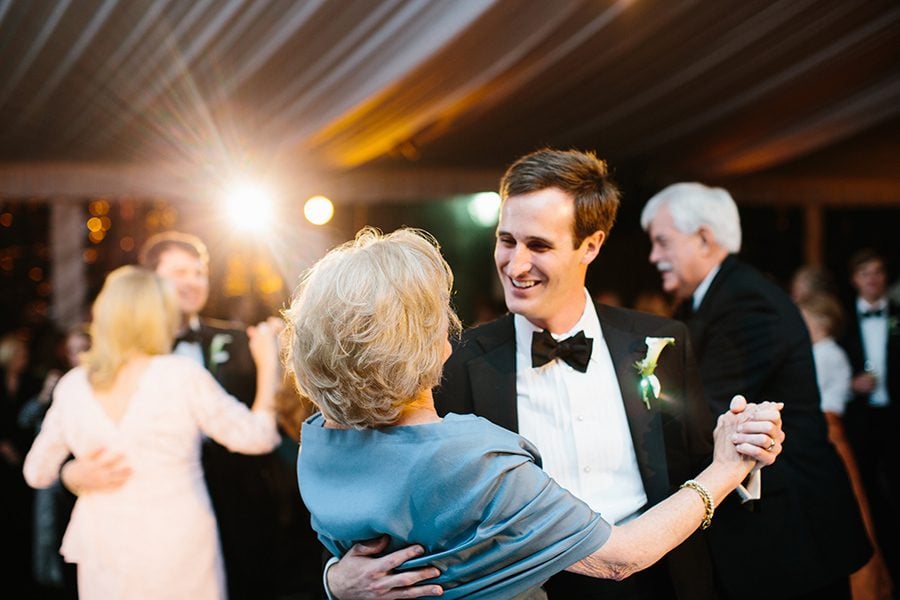 “Our guests’ enjoyment was top priority all throughout wedding planning,” Heather says. “Robert and I spent a lot of time talking about what we appreciated from other weddings. … My parents are fantastic entertainers, and they helped us think about the details of an event that would mean a lot to the guests. We also tried to come up with as many ways as possible to make guests feel important.” Among those? Wraps for girls to wear if they got chilly at the reception, food that was easy to eat while standing and rehearsal dinner place cards that were actually handwritten notes to each guest thanking them for being there. “We thought guests would be more excited to see a Time-Out food truck with late-night chicken biscuits than see us waving goodbye from a fancy vintage car, so we nixed an elaborate getaway,” Heather adds. “We also struggled to remember favors from any of the weddings we had been to and so we passed on those and had a photo booth, instead.”

“I thought I had relatively simple criteria – I wanted a pair that felt special enough for a wedding but weren’t so dressy that I couldn’t wear them often again, and I wanted a lower heel to be comfortable all day and night,” Heather says. After searching for months, she landed on this studded pair, which at first caused her mother to “furrow her brow and say, ‘You’re kidding me, right?’” Heather recalls. Of course, everybody came around to the edgy-meets-classic choice. 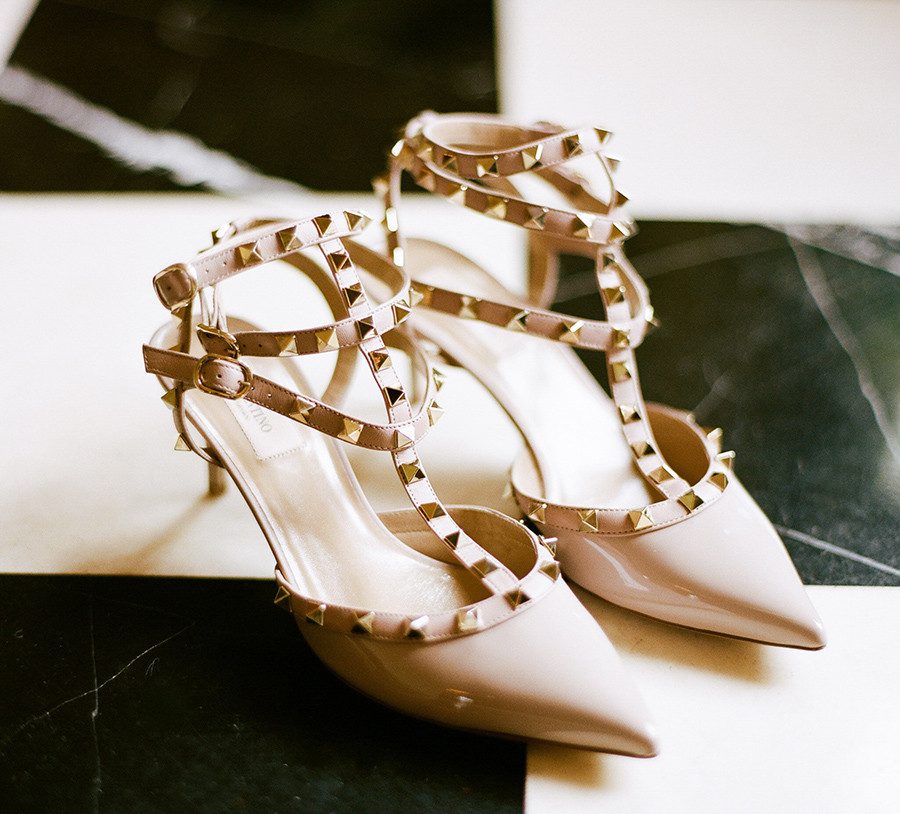