Pickleball: The Latest Sport to Take Chapel Hill by Storm

You can’t live in town and escape college basketball. Same goes for college football in the fall. And on most weekends, the soccer fields are crowded with kids, coaches and cheering families. But there’s one sport that has flown under the radar, until now.

When Jim Wilson moved to Chapel Hill after retiring, he knew there was something missing: a place to play pickleball – an addictive, strategic paddle sport. “My wife and I had moved into this area, into Fearrington Village,” he says, taking a break from a match on a sultry morning at Ephesus Park. “I was a pickleball player from up north, and there was no pickleball within half an hour, so I thought ‘I gotta get something going.’” 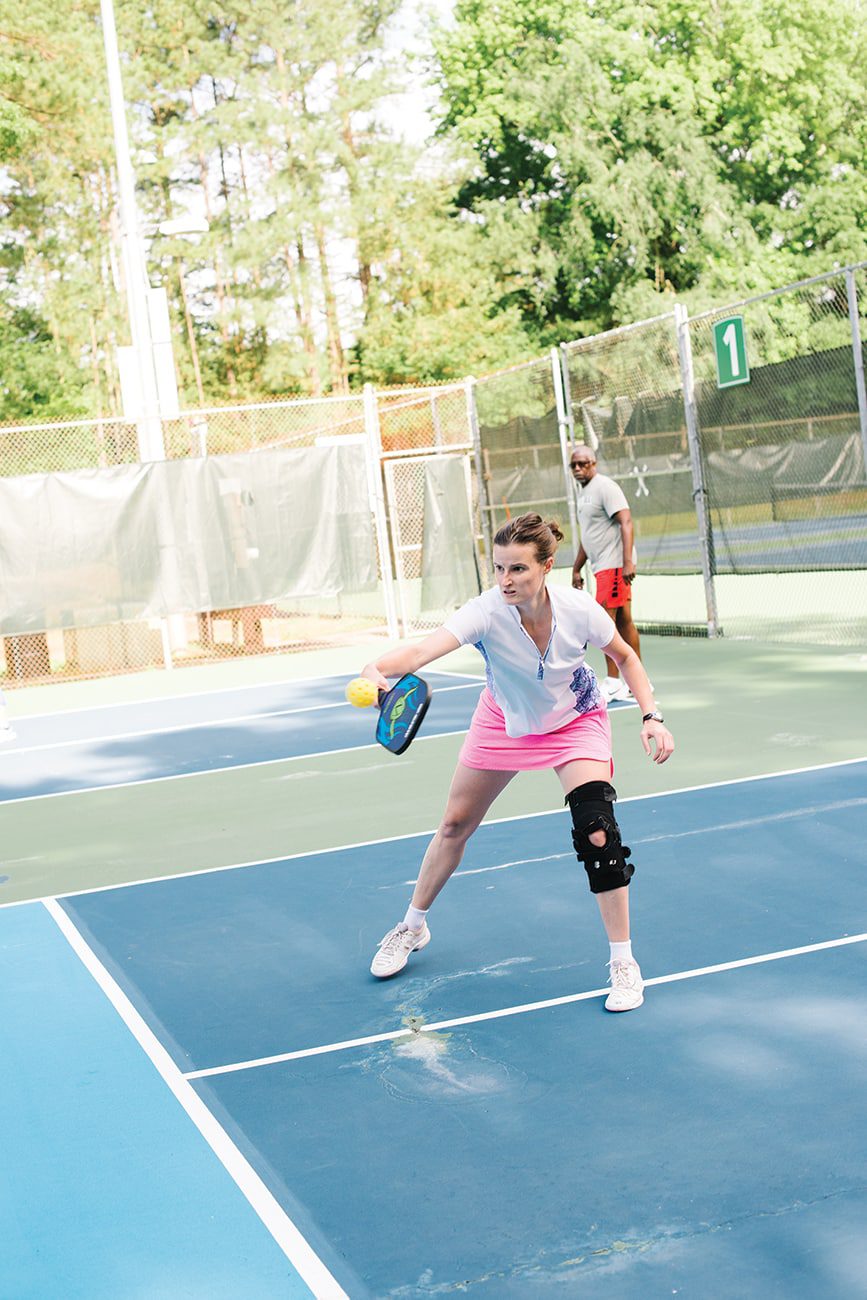 Jim got to work. Around six years ago, with the help of around a dozen others, he helped found the Chapel Hill Pickleball Association, which now boasts around 700 members. One of those founding members is JB Marr, who serves as one of Chapel Hill Pickleball’s ambassadors to the United States Pickleball Association (USAPA). When JB first helped kickstart the club, he had little idea that pickleball would catch on in Chapel Hill. Now, he is optimistic that they can convince the town to build even more pickleball courts, adding to the six that have already been furnished.

“Our goal is to expand here,” JB says, gesturing to the surrounding courts. “The intermediate goal is to convert two of these tennis courts to more pickleball courts. A longer-term thing is to have 24 outdoor courts and a couple of indoor courts.”

In addition to weekday morning gatherings which feature all levels of experience, Chapel Hill Pickleball also has evening ladder leagues for intermediate and advanced players, plus a weekly clinic for beginners after an initial orientation. The organization also hosts tournaments, holding its first competitive event in 2017 for 170 teams, as well as a social fixture in April.

But what is pickleball, anyway? To give me a better idea, JB invited me to an impromptu match on one of the unoccupied tennis courts (every pickleball court was filled). The rules seemed simple and close enough to tennis: you play doubles with the first team to 11 winning. Each team serves cross-court, hitting a ball that resembles a wiffle ball into the other side’s opposing quadrant. Unlike tennis, however, you aren’t allowed to hit the ball when it’s right over the net, in an area called “the kitchen,” and the ball loses speed after each thwack. Furthermore, the court is just over a third of the size of a tennis court, limiting the distance you need to cover. As a result, pickleball is almost entirely a game of strategy and positioning, rather than brute physical force.

Hitting to the opposing side, I immediately lost my serve because of a fault. Then I received a lesson in moving while on defense,
as the other team capitalized on my poor positioning to win three consecutive points. By the time I finally won a point on a nifty drop shot, it was match point for the other team. Yet, throughout my experience of being taken to school, I witnessed first-hand Chapel Hill Pickleball’s biggest strength: community-building through constant encouragement and sportsmanship. It is no surprise, then, that the club has received commendations from USAPA and traveling pickleball players, as promotions and special events coordinator BJ Attwood tells me, or that the game has such a positive influence, both physical and emotional, on its players.

“For so many of them, this has just been a gradual improvement in their physical health, their stamina, their endurance, their ability to get out on the court and socialize and not have to make an appointment to have some physical activity,” says Linda Alexander, club member and health educator. “The friendships out here are just amazing, they’ve just evolved. I don’t think any of us knew each other before we got out here, and every morning we’re checking on each other, caring for each other,” she says. 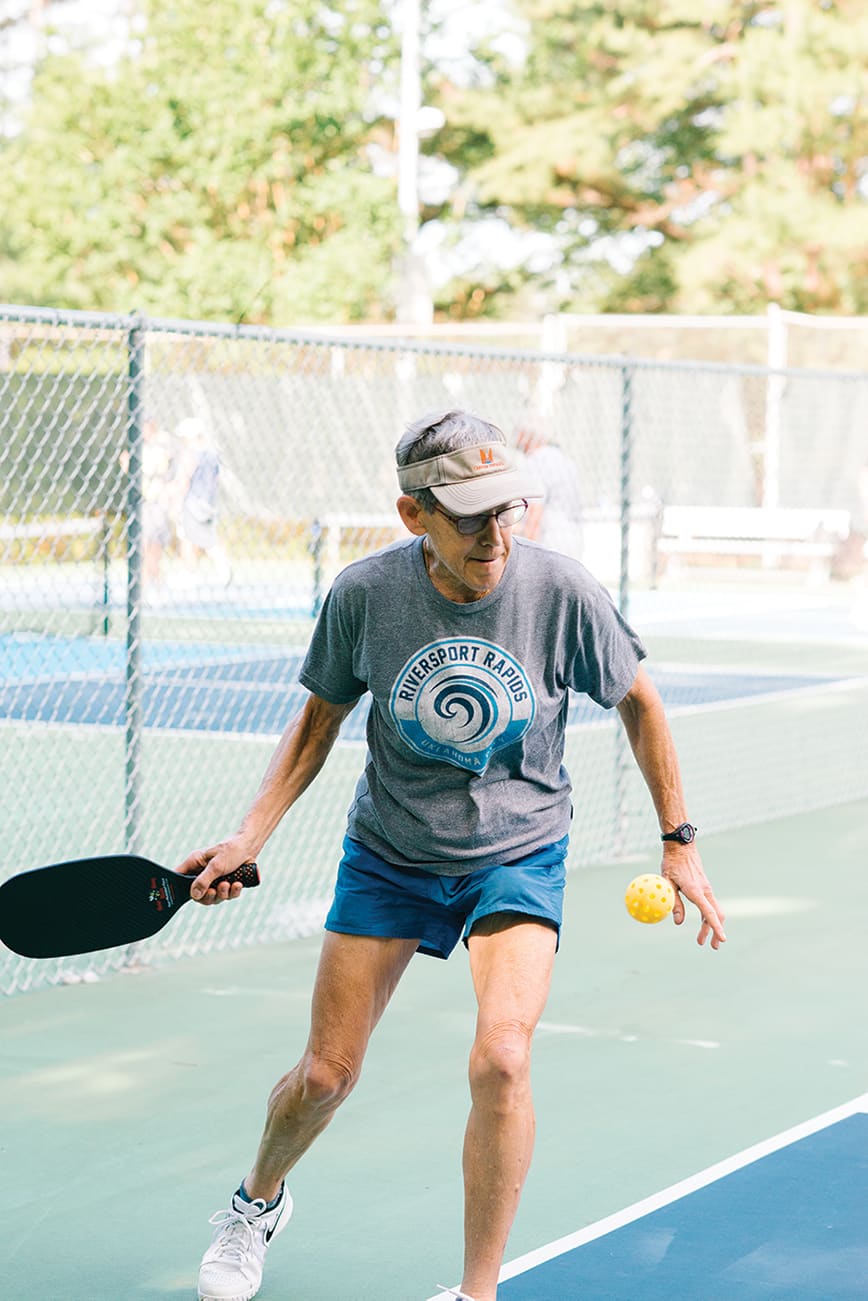 Santul is an intern at Durham, Chapel Hill, and Chatham Magazine and attends Georgetown University, where he writes for student journalism and reminisces about idyllic life in the Triangle.