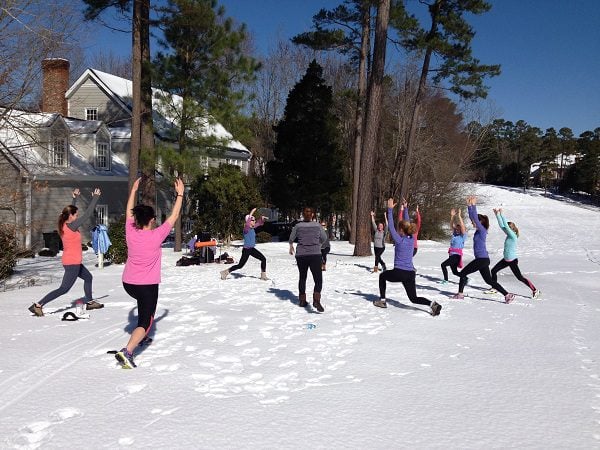 As its name implies, PopUp classes meet at various locations each week, including Chapel Hill Country Club, The Farm, Hope Valley Country Club and even an early morning class at Progression Climbing (“they were like, ‘sure, we’re definitely not using the space at 6 a.m.,’” Katie says of that last one). You show up, pay $10 and take the class. Bring a yoga mat if you can – although it’s no big deal if you don’t – and the rest of the equipment is provided.

With no strings attached, I decided to pop in to a class. In the interest of full disclosure, you should know that my idea of staying fit is walking my dog, casual jogs and a lot of yoga. It’s been a long time since I stepped into a weight room or a gym. Nonetheless, I arrived at Chapel Hill Country Club on a rainy Monday morning, greeted by a sign-in sheet flanked with two pink mason jars full of $10 bills. I tentatively chose a station over in the corner, which had a setup of two paper plates, a red resistance band, a green strength band and a pair of two-pound weights (two pounds! I can handle this!).

Before I had time to doubt myself, Katie started blasting music and cueing cardio warm-up exercises – jumping jacks, running in place and the like. We quickly moved on to cardio-strength hybrid moves like pulsing lunges holding our weights and all sorts of plank moves with our feet on paper plates (all the better to slide them around). It was the kind of workout where you don’t really realize what’s happening and then, bam!, you’re dripping in sweat and muscles you forgot existed are shaking (two pound weights have never felt so heavy).

It’s all done to thumping, upbeat music – I definitely heard both Bruno Mars and Tupac – and Katie is a dream instructor, frequently encouraging members by name but also being that mix of enthusiastic and relentless necessary to keep you from giving up. “I try to hit every muscle group in each class,” the longtime fitness and PureBarre instructor says of the 60-minute PopUp routine, which is never the same. “I want it to be the workout that you come to and then that’s it, you’re done for the day.”

Mission accomplished. Before I knew it, we were rolling out our yoga mats for a little stretching at the end of class and my heart rate was back down to normal. Katie has now brought on two other instructors, and they all prioritize not just working every muscle group, but also lengthening them. Maybe that’s why I almost doubted the workout I just had – I’m not used to feeling so relaxed and loose after such intense interval bursts. (All doubt was quelled the next morning when I woke up, sore in that I-just-did-something-awesome-for-my-body way.) What’s more, I felt like a million bucks all day. I’m no stranger to endorphins but something about the PopUp mix left me clearheaded in a whole new way.

“It really is about empowering women more than it is about working out,” Katie says. “We want it to be fun and to be a community.” For what it’s worth, PopUp has taken off in its year or so of existence, almost entirely via word-of-mouth. Weekly offerings include yoga and Pilates alongside the characteristically unique PopUp, and attendees can now purchase bulk class passes. “Some people still want to just show up and put $10 in the jar,” though, she says. “And that’s great. Come when you can! We’re always glad to have you.”

As you consider what your fitness goals may or may not be for this year, PopUp is certainly worth a shot. Take it from this low-key yogi: once you pop, you might not stop.

Check out popupworkout.com for the PopUp schedule and full class descriptions.