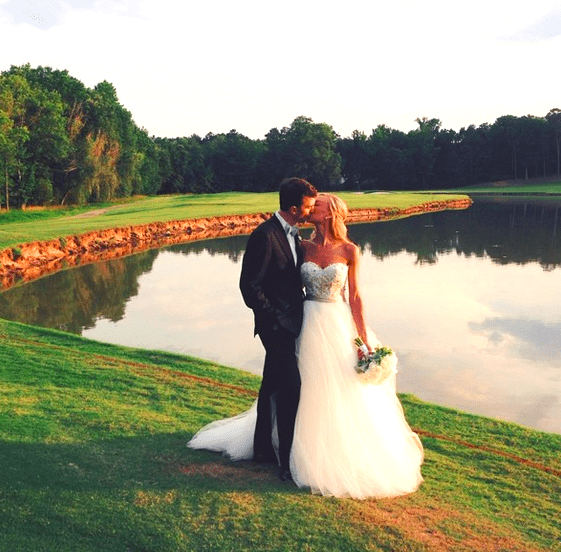 College sweethearts Alexandra Hershey and Conrad Gordon met and dated at Duke University but were separated when graduation took Conrad to New York City and Ali left for Washington, D.C. Reunited a fateful five years later, he eventually proposed to her on their former campus.

The rehearsal dinner was held at Elaine’s on Franklin and afterward, guests and the wedding party – including Conrad’s parents Ross and Maggie Gordon, Ali’s parents, Garland and Barbara Hershey, and siblings Brooke, Dru, Paige and Trip Hershey – spent a raucous evening together a few doors down at The Crunkleton.

The next day, the June 21 ceremony and reception at the Chapel Hill Country Club fell on the summer solstice, a day with special significance: Ali’s half-birthday.

Ali shone in a couture Monique Lhuillier gown as she walked down the aisle to The Beatles’ “Here Comes the Sun,” bringing the sun and solstice theme to life. As the ceremony began, the clouds parted, tying it all together perfectly.

Ali and Conrad, who reside in Washington, D.C., are already considering plans for a second annual summer solstice party in June.

Editorial intern Kelly Archer is a junior public relations major in the journalism school at UNC. She loves to read, dabbles in photography and appreciates a good donut.