The First Taste of Pizzeria Mercato 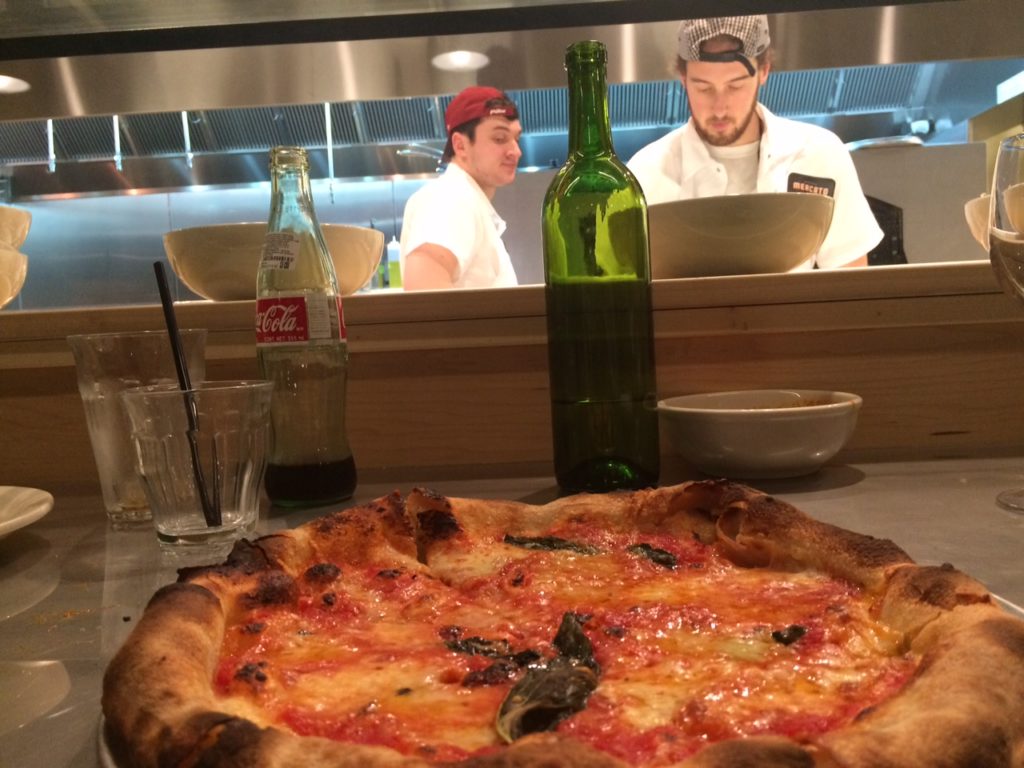 With brown craft paper still on some windows, Pizzeria Mercato made its long awaited debut on Friday. Located about as far from the Carrboro Farmers’ Market as one can roll a winter squash with gusto, the “soft opening” of the much anticipated eatery was an opportunity to test the menu before a friendly group of invited guests. Folks not only contentedly nibbled on free, exceptional pizza, seasonal appetizers and mind-blowing gelato but also put the young wait staff to the test. With the exception of a fourth pizza that arrived long after the first three, a miscommunication that inspired heartfelt apologies, the service was topped only by the pizza. And dessert. And the comfortably artsy decor.

But it’s the pizza that everyone is asking about, so here goes: With the foundation of a thin, chewy crust whose flavor suggests a long and slow fermentation, Pizzeria Mercato easily meets expectations of “artisan” quality. Small surprise from the folks that brought you Magnolia Grill, where Mercato Chef Gabe Barker used to take baby naps on the pastry bench.

Gabe looks like a tall version of his mother, Karen Baker, and possesses dad Ben Barker‘s deft touch with spare, intensely flavored ingredients. This was immediately apparent from the warm, marinated and roasted olives ($6) and fritti ($8), tender and oozy pimento-cheese-stuffed rice balls that could have been a cliché in less able hands.

Gabe’s confident manner in making pizza came not from the elder Barkers but rather from his stint at San Francisco’s renowned Pizzeria Delfino, where he worked before returning home last year to open his own shop. He adds a Delfino touch – a last-minute dressing of panna, a creamy, slightly sweet sauce – to several of the personal-sized pizzas on the menu.

Listen to Gabe talk about his culinary venture in our latest podcast –> LISTEN HERE.

As its name suggests, Mercato’s menu will vary seasonally. On this night, options ranged in price from $13 for the Margherita to $17 for the Funghi, a mix of savory mushrooms. Each was carried fast enough from oven to table that the enticing aroma of char made burnt bubbles in the crust a particular delicacy.

In addition to the Margherita, our table enjoyed the Mustard Greens ($15), with fragrant fennel sausage; the Panna ($14.50), garnished with fresh, peppery arugula; and the Carbonara ($16.50), which featured a barely set farm egg atop guanciale, pecorino and a liberal grating of black pepper. If you don’t use some crust to scrape glistening yolk from the serving dish, shame on you.

Dessert options included a trio of ice cream flavors that suggested Karen’s creative signature. The creamy vanilla gelato was luscious, as was the espresso, which was loaded with crunchy chunks of chocolate. The showstopper, however, was a vegan lemon-coconut sorbetto. Everyone we observed who tried it wore the same stunned expression of delight.

Guests could not be blamed for being slightly distracted from the food by the setting, which features rustic chestnut tables and colorful bench seatbacks made from salvaged wood by Jeff Knight of Knight Woodworks and Seth Burch of Durham’s Hollow Rock Construction. Other craftsman finishes were produced by Brian Plaster Design of Carrboro, which created all the metalwork, from the pizza box holder to the bike rack.