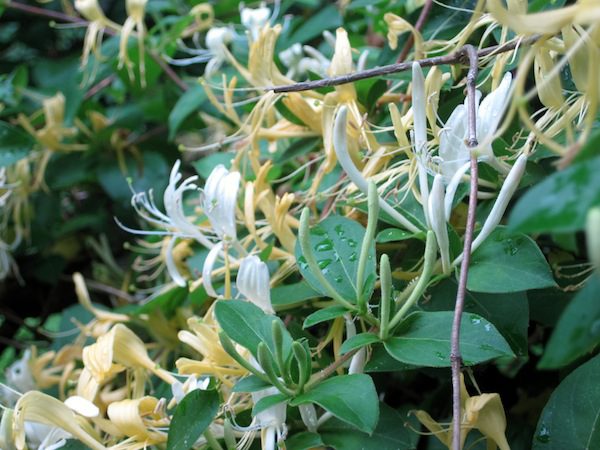 Most nights in May, right around 6 p.m., Bill Smith walks out the side door of Crook’s Corner with an iced pitcher concealing a can of Pabst Blue Ribbon. He heads directly across the street then down a path leading to a tangle of plants and weeds that sprout from the broken asphalt of an abandoned parking lot.

As he approaches a lush thicket one warm Friday night, the humid air hangs like a curtain. Step through it and you’ll be enveloped in the rich perfume of honeysuckles – an aroma so transporting that it instantly beckons forth childhood memories of pulling out the delicate stamens to reveal tiny beads of nectar.

“Sometimes, when the pitcher gets full of blooms, I just like to close my eyes and breathe in the aroma,” Smith says, leaning in as if nosing a snifter of fine cognac. “I’m amazed every time how intense it is.”

It’s not usual for this ritual to attract a crowd. This sultry night draws a young man on a bicycle who rolls in to inspect the harvest. He pauses to pull back his dreadlocks to cool his neck and ask what’s happening. “We pick these to make sorbet,” Smith says, launching into a polite speech delivered a hundred times each spring.

“That’s really cool that you make something with these,” the fellow says, inhaling deeply as he surveys the seemingly endless supply of weedy blooms. “They smell so good. It must be wonderful.”

It is. Smith’s honeysuckle sorbet is a true rite of spring at Crook’s Corner, the Chapel Hill landmark where whispers and hopeful online postings routinely draw room-filling crowds. Even though the recipe is posted in Smith’s celebrated 2005 book, Seasoned in the South (Algonquin Books), and available from several online links, fans prefer to enjoy it made by the hand of the master.

“It’s part of town lore,” Smith says with an amused shrug and a swig of PBR. “Sometimes, when people hear it’s available, it’s like a riot in here. It’s the same with soft shell crabs. I’ve trained my staff to be clear: We will have it when we open at 5:30. No, we cannot save it for you.”

Despite this, some diners can’t help but make a fuss when the legendary stuff runs out. “I tell them, ‘It’s time to be an adult,’” Smith says, peering over his glasses in a humorous visage of mock scolding. “People do sometimes lose it, but seriously. I mean, we’ll have more.”

Until they don’t. Honeysuckle sorbet is available most nights in May, and sometimes well into June, so long as the bushes are productive. After that, fans must be patient until the following spring.

“We tried to save a batch once as a special treat for New Year’s, but it tasted like sugar and ice,” he recalls. “The flavor just disappeared.”

It took three years for Smith to perfect the recipe, which yields a snowy, fragrant sorbet that he swears is different with every batch. A sampling from different pickings both were exceptionally delicious and refreshing, but in fact, one was decidedly more floral and satisfyingly slushy.

Elizabeth Du Bosc of Chapel Hill has been addicted for years. She stops at Crook’s Corner at least two or three times a week when it’s available, including her May birthday, and gleefully brings friends and family to get them hooked as well.

“You are God’s gift to TASTEBUDS,” she declared recently on her Facebook page, where she also confessed to dabbing a bit behind her ears like perfume. She’s also slurped this season’s treasure wearing a tiara of woven honeysuckle blossoms.

Not everyone is so convinced. At least once a year, Smith says, “I get yelled at by angry botanists. They say things like, ‘Don’t you know that’s an invasive species?’ Good lord. I didn’t plant it, and at least I’m making use of it. It’s silly to castigate me.”

While angry botanists may disapprove, wild honeysuckle can be found on roadsides and along greenways throughout the Piedmont. A forager’s delight, it takes hardly any time to collect enough for a batch of sorbet, which requires little more effort than using an ice cream machine to turn into the stuff of mid-spring’s night’s dream. Smith favors an old-fashioned crank with rock salt, but whatever you’ve got should work.

Place the flowers in a nonreactive container (glass or stainless steel) and cover with cool water. Weight down with a plate. Let them stand on the counter overnight.

In a small sauce pan make a syrup out of the sugar and water by boiling it until all sugar is dissolved and it begins to look lustrous and slightly thick, 3-5 minutes. Add a few drops of lemon juice to prevent the sugar from recrystalizing. Cool the syrup completely.  Strain the honeysuckle infusion, gently pressing the blossoms so as to not waste any of your previous efforts.  Combine the two liquids and add the merest dusting of cinnamon. You don’t want to taste it but you can tell if it’s not there. Churn in an ice-cream maker. This does not keep more than a week or two.

Lucas blogs at Eating My Words. Follow her at @jwlucasnc.