North Carolina native Eugene Rossitch and California girl Stephanie Salcedo both attended UNC for grad school, but at different times. They first crossed paths online, and soon after that, had their first date at Tobacco Road, where they realized almost all of their interests overlapped, including reality TV and traveling. A short trip of her own took Stephanie away from Eugene for a little while, but as soon as she got back, they continued getting to know each other. 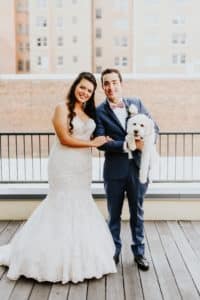 When it came time to get engaged, Eugene decided to head back to where it all could have begun and surprised her while walking their dog, Ollie, at the Old Well, complete with their friends and family leaping out of the bushes.

Ollie again joined the couple on their wedding day – May 27, 2018 – during their first look. They honored their Mexican and Cuban backgrounds with a full bilingual ceremony officiated by Rev. Ron at The Stockroom at 230 in Raleigh. Ever the foodies, Eugene and Stephanie made sure everyone loved the menu at the reception, which featured tacos, chicken and waffles and Korean BBQ. They spent the night surrounded by family and friends and even had a current UNC student show up as the guest of honor – none other than Rameses Jr.

The couple resides in Chapel Hill.

Jishnu is an editorial intern at Chapel Hill Magazine. He's a junior newspaper journalism major and politics junkie at Syracuse University's Newhouse School who originally hails from New Jersey. When Jishnu isn't writing, you can find him watching, playing, or talking about soccer. Alternatively, you could find him on his couch rewatching Game of Thrones for the 7th or 8th time.