When Luca Tomasi, a Chapel Hill native, asked his classmate, Rachel Dunn, out on a date during a school day at Durham Academy their junior year, they might not have guessed their relationship would blossom over ten years together. After spending their college years apart – Luca at Duke and Rachel at William & Mary – and then their early careers in different cities, they reunited in Philadelphia, where they lived with their puppy, Peyton.

The couple was traveling in Seville, Spain, this past winter, when Luca proposed to Rachel on the rooftop of a beautiful old hotel with a great view of the Seville Cathedral. Months later, friends and family from Italy to Montana gathered on May 5, 2018, at St. Thomas More Catholic Church. In attendance were Luca’s parents, Carlo and Cristina Tomasi, Rachel’s parents, Bart and Kathryn Dunn, and even Luca’s uncle, Michele Tomasi, a priest, traveled from Italy to co-officiate the wedding. 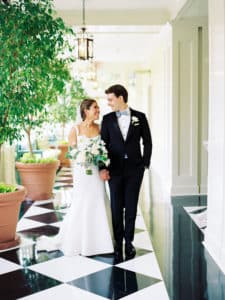 Rachel’s father made the audience both laugh and cry during his speech about her relationship with Luca at the Carolina Inn reception. Another memorable moment was when the band played “New York, New York” by Frank Sinatra as an ode to Rachel’s late grandfather. “I still smile when I think of our band and the energy they brought to our reception,” she says. “It was his favorite song, and it brought my entire family from New York out to the dance floor.”

The couple resides in Chapel Hill with Luca attending law school at Duke and Rachel working as a marketing manager at ViiV Healthcare.

Kensey graduated from UNC with a B.S. in biology and a minor in chemistry. She loves reading, writing, traveling, and practicing her Spanish.