Make Your House Cozy With ‘A Well-Crafted Home’

Hillsborough native Janet Crowther grew up in an environment that encouraged self-expression – especially through crafting. “My mom was always making things: clothes, cakes, furniture, cards and gifts, you name it. The entire upstairs of our house was my bedroom and then a gigantic craft room with designated stations for painting, cardmaking and sewing.” Janet’s book, “A Well-Crafted Home,” is the result of a lifetime of creativity being tasked with one huge blank slate: furnishing and decorating her own new home. 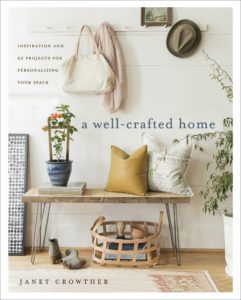 After spending 10 years in New York City, she moved back to North Carolina two years ago with her husband and daughter to be closer to family. “A lot of my book came from needs and wants for our new house,” Janet says. “Designs like the throw pillows and the cutting board fit beautifully and practically into our new space.”

Organized by room, rather than material or purpose, there’s a craft for everywhere from the front door to the bathroom. Janet’s father, a carpenter, also inspired several projects in the book; “He can fix or make practically anything,” she says. The book opens with a piece of furniture – an entryway bench – which seems like a bold choice, until the well-written instructions reveal just how easy it is to put together.

When viewed as a whole, Janet’s projects feel cohesive, authentic and accessible; it’s easy to see several of them working in the same space without crowding one another. However, each craft is distinctive in both style and practicality, which makes the book a great resource for handmade gift ideas, too. “I’ve gifted the linen tea towels and the leather napkin rings from my book quite a lot,” Janet says. “They are easy to make and really feel luxe.”

Filled with stunning photos taken by Julia Wade in homes throughout North and South Carolina, “A Well-Crafted Home” is sure to inspire even the most seasoned crafter to try something new. 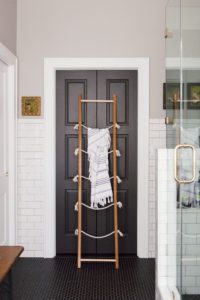