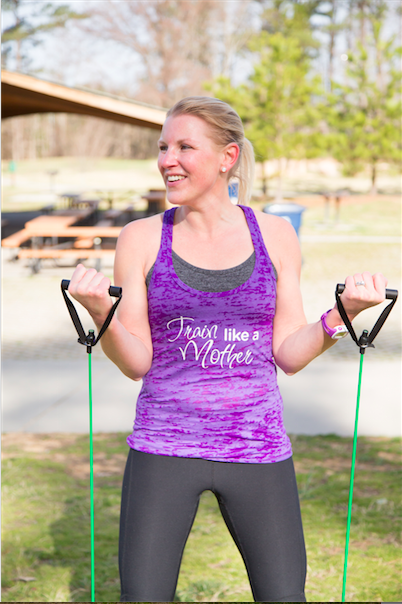 You might have seen them: A troup of moms pushing jogging strollers through Southern Village or Briar Chapel, music thumping. Before too long, they stop along a jogging path or green space and whip out exercise bands for a few strengthening moves. Then, it’s back to the pavement, off and running to the next station.

It’s a typical Stroller Strides class, a boot camp-style group exercise session catered to mothers and offered by Fit4Mom Chapel Hill. “When people hear ‘Stroller Strides,’ they think it sounds easy,” says instructor Amy Rosso. “It’s a tough workout!” So tough that one woman comes every week, even though her children are now in college – she needs her fit fix, and Amy’s classes are her favorite place for it.

A native of upstate New York, Amy’s career was in human development. But she was also a college athlete and has always been interested in fitness. After having her daughter, Sophie, a year and a half ago, she stayed home and battled a bout of post-baby blues. A Stroller Strides class in Virginia, where she and her husband were living, snapped her back to life. “It helped me kick-start becoming fit as a mom. I changed my mindset, and I really got focused on being a great role model for Sophie.”

The Rossos moved to Chapel Hill in January, and Amy saw an opportunity. “There are Fit4Mom locations in Raleigh, Cary and Durham, but we didn’t have anything for our Chapel Hill mamas,” she says. She got certified as a Fit4Mom instructor – which includes five class options tailored to every level of motherhood – and opened her Chapel Hill franchise location. “People are seeing changes in their bodies,” she says. “They’re stronger, they’re fitter, they’re faster.”

So far, Amy has only taught Stroller Strides, but this fall, she’ll add stroller barre and an 8-week “Body Back” intense workout and nutrition program. (Fit4Mom classes are $16 each, although there are package deals, monthly options and a summer special for teachers.) Next spring, look for a running group will be up and going in preparation for the Tar Heel 4- and 10-miler.

Ultimately, they’re not just building muscle. “I’m really passionate about community,” Amy says. “Sometimes you have a sleepless night and showing up to class is all you can do. Then other moms are there, going through the same thing, and you don’t feel alone. And then you feel proud of yourself that you did what you could. You got out of the house and you had a great workout for you. And you made friends. It’s a win-win.”