When Jean and Dave Haas began their home search, words like “modernism” and “famous former owner” weren’t anywhere near the top of their must-have list. The couple had spent the last 21 years living and working in Wilson – Dave as an ophthalmologist and Jean as an exercise physiologist. “Originally Dave’s medical dreams took us all over the country, but we eventually moved to Wilson to be closer to my family,” Jean says.

But once they made the decision to transition into retirement, the couple knew their home would need ample entertaining space, as well as proximity to delicious food and a strong arts and culture scene – ideally within walking distance. “We wanted a new adventure,” says Jean. And they got one – in the form of a light-filled, mid-century modern classic designed by Arthur Cogswell in 1964 for UNC basketball coach Dean Smith.

Jean and Dave credit the home’s former owners, Emily Kass and Chuck Weinraub, with making many of the three-bedroom, three-bathroom home’s modern updates. They met one another through realtor Chloë Seymore and were able to learn a lot about the home before making their decision. “Emily and Chuck gutted it in 2008 and made a lot of changes. They did a lot of entertaining and designed it for that purpose – and they kept track of everything,” says Jean. “Once we bought it from them, they moved in next door, so it was great having friends
right away.”

Although they quickly fell in love with the house, it took a little longer to make it their own. “We had plenty of traditional furniture, mostly from our families, that just didn’t work in the space,” says Jean. “We wanted to be respectful of the mid-century era but still keep things warm, inviting and comfortable.” That’s where designer Bonnie McManus came in.

“Bonnie was great at mixing colors and textures that worked with the flow of each room and finding things that complemented the architecture,” says Jean. The most recent updates included a new front interior staircase, combining two bedrooms into a master suite and drywalling most of the home, so an effective design was crucial to bringing it all together. In fact, almost every room received some attention – except for one.

“[The previous owners] decided to leave Coach Smith’s room the same way, and we’ve tried to respect it also,” says Jean, noting the original wood paneling and built-ins that were popular during the 1960s. “That was the way the entire house was,” she says. “But we kind of made it our memorial room, too.”

The room truly feels like a sanctuary within the home, filled with both UNC basketball collectibles and items that are special to Jean and Dave, including photos of their families and Jean’s father’s leather military flight jacket.

Just like Emily and Chuck turned to architect Philip Szostak and his team at Szostak Design for their renovation in 2008, Dave brought them back in to help build a woodworking shed in the backyard in 2016. “We were able to match the home’s exterior perfectly, so it fits right in,” says Dave, who is also a photographer.

The home’s spacious basement includes his photo studio, plus a laundry room, art storage, bathroom and a kitchenette. “I can just see this being where [the Smith children] could come down and hang out,” says Jean, whose four nieces and nephews enjoy relaxing in the room when they come to visit. “It’s just such an interesting house.”

The home feels even larger than its 3,600 square feet thanks to high ceilings, large windows and transoms, and a sloping landscape that can be viewed from every room. “The yard was designed beautifully and doesn’t require a lot of upkeep,” says Jean. 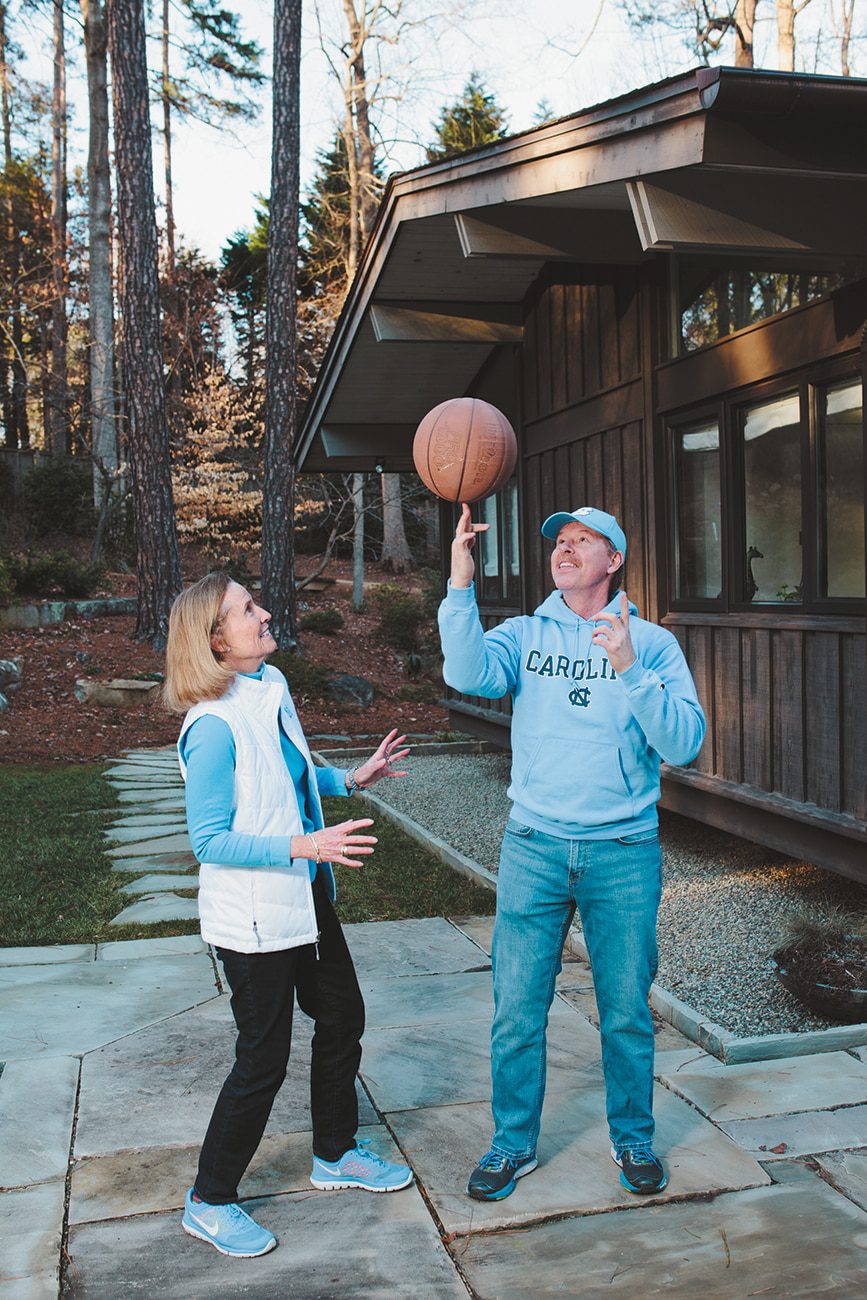 “Which helps, since we are slowly working our way into retirement,” Dave laughs. Jean works part time at UNC Hospitals Cardiac Rehab in Meadowmont, and Dave at Chapel Hill Ophthalmology; they spend their free time together exploring their new hometown.

“We try to go to every restaurant there is and love that we can walk to UNC baseball, basketball and football [games] or Franklin Street if we’re feeling adventurous,” says Jean.

Though they both consider themselves big sports fans, the home’s history is especially meaningful to Jean, who played basketball growing up and joined the UNC team her freshman year (a knee injury kept her from getting much court time). She remembers when Spanky’s opened and rushing Franklin Street after big wins. ”It’s nice to be back, to see what’s changed and what’s stayed the same,” Jean says.

“There’s definitely an energy here that we love,” adds Dave. “There is youth, intellect and beauty that is helping us see the world in new and different ways.”

Read the original article from the March 2018 Issue: