Of all the things you could ask Pho Happiness owner Andy Hoang about his life – starving in the aftermath of the Vietnam War; spending time in a Filipino refugee camp; opening a restaurant at 18, and then subsequently declaring bankruptcy a year later; serving in the military for eight years; and finally landing a job as a mortgage loan officer during the financial crisis – the first question that comes to mind is:

How did you end up here?

The answer is less spectacular than the journey …

Andy was born in Vietnam in 1975, five days before the end of the Vietnam War. The war had claimed his father’s life. He says he was better off than some others, but his childhood wasn’t easy.

“There was not a lot of food to eat,” Andy says. “We were always starving.”

At one point, Andy and his mother, Cathy Vu, spent about five months in a Vietnamese labor camp where food was scarce. Eventually Andy and Cathy became two of the millions of Vietnamese who fled the nation in the decade after the war. Cathy escaped to Hong Kong and established a network with smugglers, with the help of Andy’s grandfather, who was a French sailor. Just shy of his 10th birthday, Andy traveled on a disguised fishing boat to the Philippines, where he spent the next three-and-a-half years in a refugee camp funded by the U.S. on the island of Palawan.

“[The camp organizers] had to make sure we were not commoners,” Andy says. “That we’re disease-free, we’re able to speak English, understand, read a little bit. Just [enough to] hold a job in America.”

The wait to immigrate to the U.S. was over when Andy turned 14; he and his mother moved to Stockton, California. It was there he caught the entrepreneurial bug. By the time he graduated high school and enrolled in college, he had opened his own Vietnamese restaurant, Tamarind Bay, with financial support from friends and family. As a full-time student and business owner, he didn’t have a free moment to spare.

And then, as quickly as his dream began, it failed. Andy’s restaurant flooded one day, and the damage was beyond his ability to repair. He closed his doors.

“The world has ended,” Andy remembers thinking. “I’m like, ‘Oh, crap. What am I going to do now?’ Because I owe all this money and stuff, and I don’t know anything.”

Not yet 20, he filed for bankruptcy and, without the constant work of the restaurant, found himself battling depression. That spiral led him to a bar one day where, still not of legal drinking age, he settled for a glass of milk.

An Army recruiter was also drinking his sorrows away in that bar, and the two began commiserating.

“He’s depressed. I’m depressed. We drank,” Andy says. “And he’s like, ‘Hey, kid, what are you doing here drinking milk?’”

Andy finished that glass of milk, put his dark thoughts behind him and took the military entry test the next day. With the promise of a steady income, he quit college and enlisted.

Working as a tank mechanic in the 1990s, Andy traveled around the world with the Army, getting a firsthand view of conflicts from the Rwandan genocide to the Kosovo War and the Srebrenica genocide in Bosnia. Andy says the Army changed his view on life.

During his two final years of service in Fort Hood, Texas, in 2003, he earned an accounting degree. He moved back to California – at the height of the Silicon Valley boom that year – where he landed a high-paying job in realty and mortgages.

And then, just as before, he lost everything. The stock market crash and ensuing financial crisis in 2008, as was the case for so many Americans, sapped him of his livelihood.

Instead of wallowing, Andy set out to help others facing the same hardships. He took a job with a law firm specializing in so-called mortgage modifications, helping homeowners adjust the terms of their mortgage to keep from losing their homes.

“I saw a lot of people crying,” he says. “Families separating because of it. It was tragic. I did that for about a year and a half. I didn’t like that.”

And then, at last, a bright spot. He always had happy memories from a visit with a cousin in Raleigh who owned a nail salon. He liked the area during that trip, and when he thought about starting over again in 2010 – for the fourth time – he decided to do it in North Carolina, taking a job as an accountant for the Federal Deposit Insurance Corporation (FDIC).

That year, Andy met Yuki Hirose, who was visiting America from Japan. A mutual friend introduced them, and they were both smitten. When the FDIC moved him to Dallas, she relocated with him. They got married and spent the next three years there. After a brief stint in Washington, D.C., the couple landed back in North Carolina in 2017, where Andy took a field job for the FDIC examining banks in West Virginia.

The moves and starting over in new places were now commonplace for Andy, but they were taking a toll.

“I have a lot of post-traumatic stress from being in the military,” Andy says. “I go through a lot of therapy. Mentally, I was not stable because this field job. I got out there, and I saw stuff … and it triggered me.”

The empty, barren farm fields Andy passed on drives between North Carolina and West Virginia caused him to recall the rural lands of Rwanda, Bosnia and Kosovo. Old, unwanted memories cropped back up, and his anxiety and flashbacks progressively worsened.

Last August, the toll became too much.

Andy’s depression didn’t ease, but changed how it manifested. He began “clearing rooms” in their house, taking a weapon through each room to make sure there was no danger. That behavior scared Yuki, and she took their then-2-year-old son, Lucas, to Japan for a few months to stay with her family. 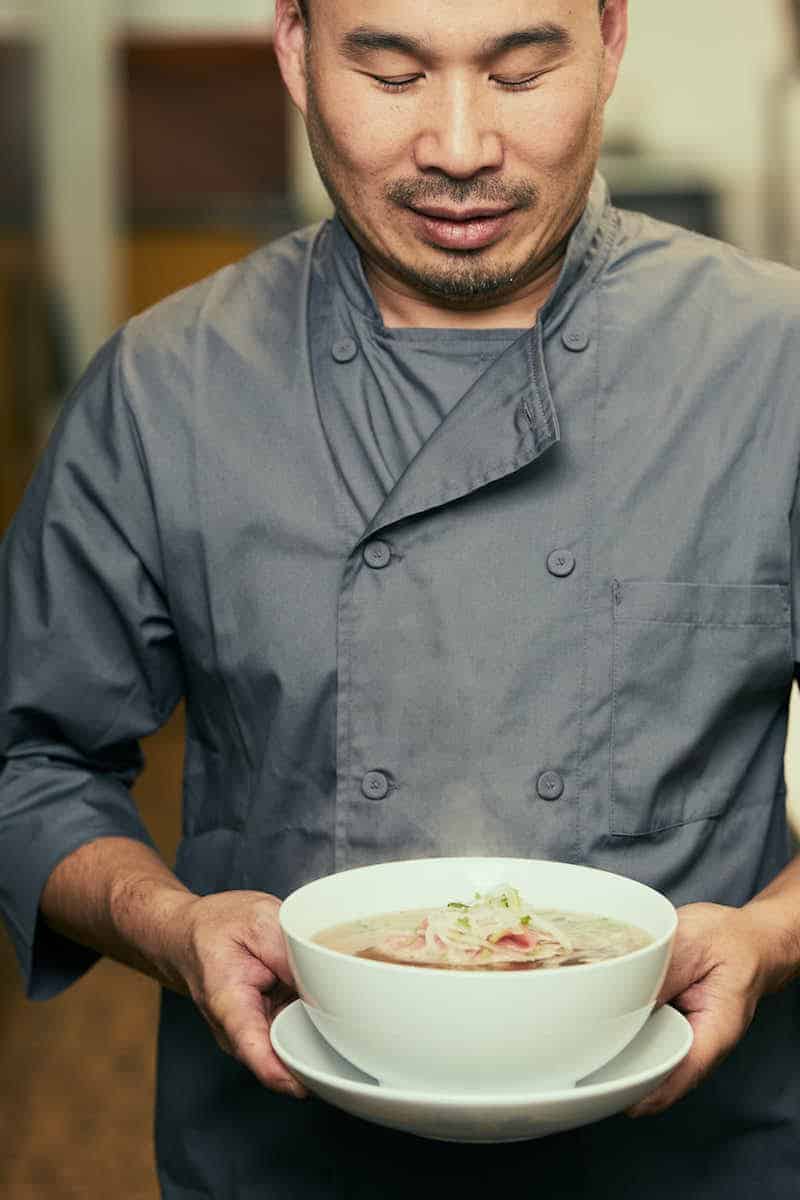 And that’s how the Vietnamese restaurant Pho Happiness came to West Franklin Street, as the rebirth of the dream he had as a hardworking high school kid.

“My stepdad [Hung Vu] is a very good cook,” Andy says. “He was a chef for a long time. So I talked to my mom, and she was like, ‘Yeah, you should open a restaurant.’”

Now he had a plan, but needed help. He moved his parents from Dallas to help run the kitchen. Yuki was skeptical and told Andy it might not be a good idea. But for each doubt she raised, he always found data-driven research to back up his point.

Yuki says she was happily surprised to return from Japan to find a completed restaurant in early March. She now helps Andy manage the restaurant. Food, Yuki stressed, has always been a vital part of Andy’s life – his memories of hunger in Vietnam still strongly resonate with him. “He loves food,” she says. “He eats so much.”

And so Andy has filled the menu with his favorite recipes, from seafood pho to banh mi. He even borrows from his wife’s native Japan with dishes like ramen and gyoza. He’s proud of how he’s taken these traditional meals and made them his own with a modern twist.

Andy continues to look forward, even if he hasn’t totally come to terms with his past. For now, his restaurant and his family are his everything. And that’s good enough.