Before moving to Chapel Hill, Dr. Margaret Sheridan and Adrian Bischoff spent a lot of time in a lot of cities. Margaret was born in Iceland and grew up in Maine, Italy and Virginia before graduating high school in Michigan. Adrian was born in Ohio to South African parents and grew up in Pittsburgh. College and careers took them across the United States and around the world – Margaret spent time in St. Louis and New York, and earned her Ph.D. at the University of California, Berkeley; Adrian lived in Palo Alto, Taiwan and Cape Town, and earned his master’s at Stanford.

When their paths finally crossed in Boston in 2011, Margaret was teaching at Harvard Medical School and Adrian was working as a mechanical engineer. They married in 2014 and soon realized they were both ready to stay in one place for a while.

During their search for a new hometown, the pair had a rather unique checklist. At the very top? Maintaining the walkable lifestyle they were used to. “After living in so many big cities, we just couldn’t envision being anywhere we had to drive all the time,” Adrian says. When Margaret was offered an assistant professor position in UNC’s psychology department, the couple took a trip to Chapel Hill. 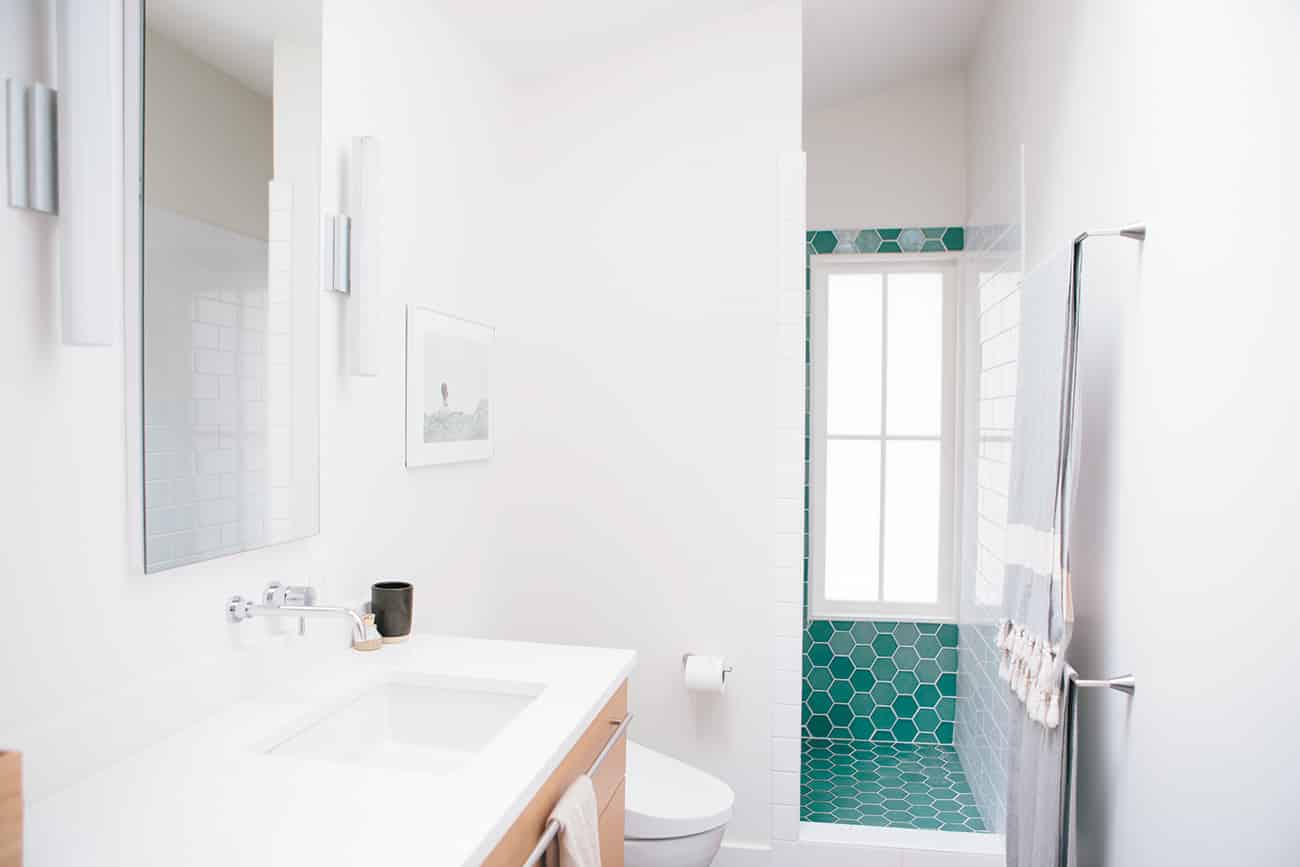 “Our realtor, Susan Walser, probably thought we were crazy,” says Margaret. “We would ask her to drop us off a mile or so from the house we were touring that day and tell her we’d meet her there.” Seeing Chapel Hill on foot helped her and Adrian get a sense of the town and ensured their new digs wouldn’t be far from restaurants, cafes and things to do. Also on the checklist: natural light and room for guests.

It was this perfect mixture of size, character and location that led them to purchase their home on McCauley Street in June 2015. Built in 1932, the 2,300-square-foot house had been split into three apartments a few decades ago and needed to be revamped back into a single-family home. Though they didn’t envision themselves in a renovation property, “it was too perfect to pass up,” says Margaret.

Phase one of the renovation was completed this summer and successfully combined the two main floor apartments into a larger living space. This involved flipping the kitchen layout, relocating a bathroom and adding everything from new windows and skylights to flooring and cabinetry. “We decided to match all of the doors and windows to the existing style to preserve some of the charm,” Margaret says.

During the renovation, Margaret and Adrian’s son, Oliver, now 2, was born. They retained the upstairs apartment, and the family of three lived in it during the renovation. A phase two is planned for the future and would incorporate the apartment into the rest of the home.

The couple worked closely with architect Cari Filer of Cari Filer Studio and contractor Alex Sayre of Argyle Building Company to ensure the layout would suit their needs for the long term. “When you hear people say ‘take it down to the studs,’ you don’t realize what it means. We didn’t think that we were going to go that far, but in the end, that’s what we did,” Adrian says. 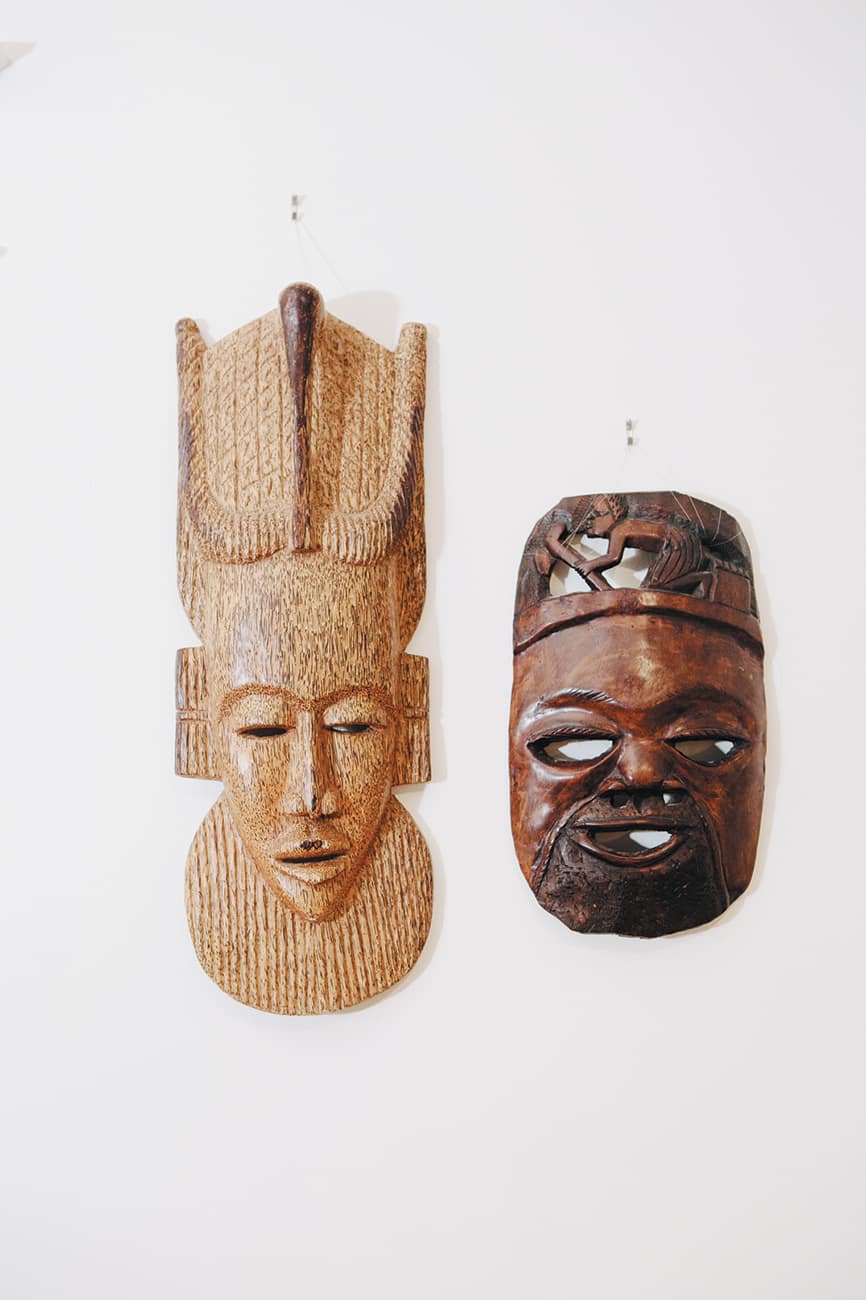 The first nod to Southern life can be found on the front porch, where the ceiling is painted Carolina blue. An antique map of North Carolina hangs in the foyer; “We collect one for every place we’ve lived together,” says Margaret.

Stepping through the front door is like taking a trip around the world. The walls and shelves are adorned with wood carvings and masks from South Africa and artwork by friends hangs on the walls; an Italian marble cabinet serves as a bar in the dining room. 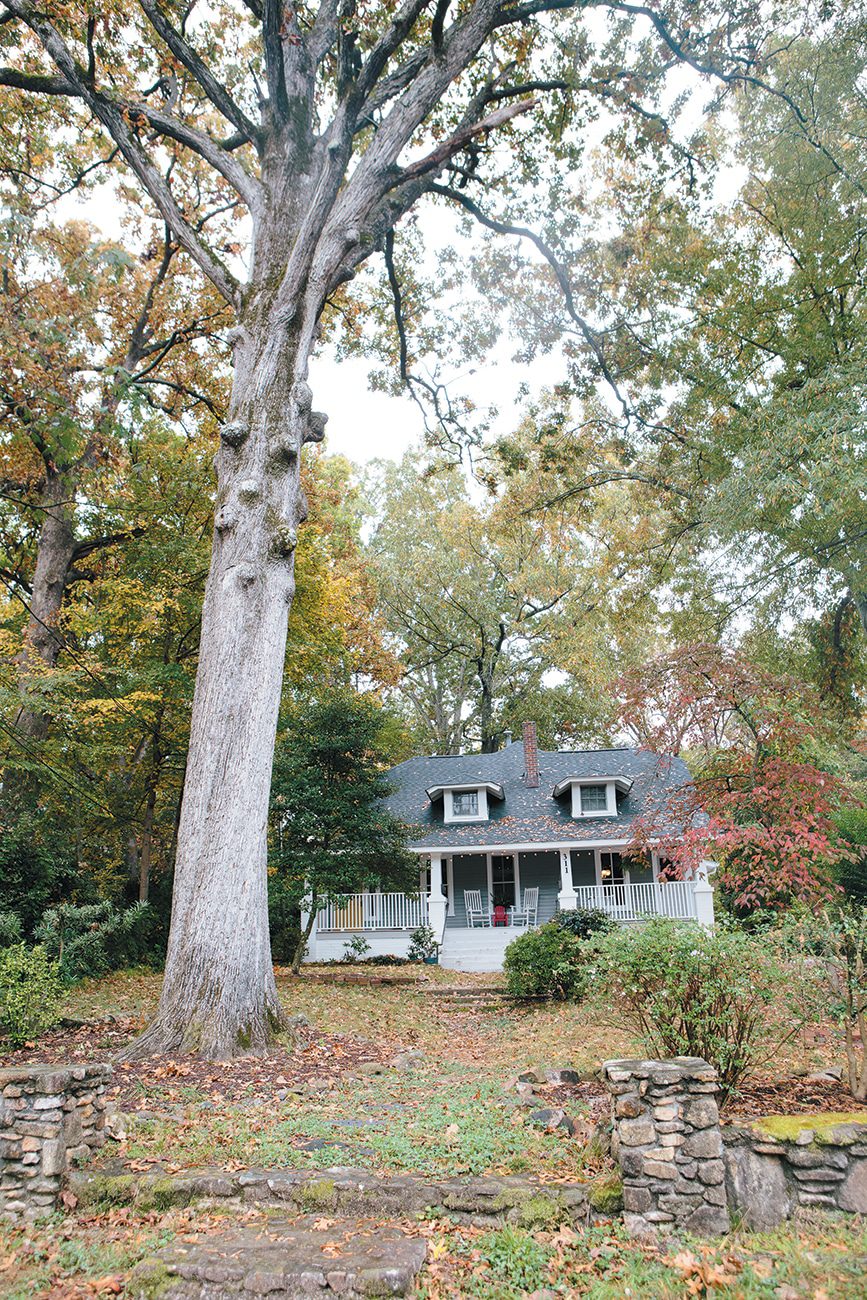 Each room is also home to a number of reclaimed and upcycled elements. Some, like the beadboard ceiling in the guest bath, were salvaged from renovation, while others take the form of functional pieces that the couple has brought back to life. Adrian built the coffee table in the living room from a vintage bowling lane, and the modern pedestal table in the kitchen was built from wood found at Reuse Warehouse in Durham. The master shower is tiled in recycled glass and the guest bedroom features a bookcase from The Bookshop on Franklin Street, which closed earlier this year.

The home’s proximity to music shops and venues was an added bonus for Adrian: “We love Cat’s Cradle,” he says. “They get a really great mix of every type of band.” He plays banjo and collects records, so building in plenty of music storage was a necessity. He and Margaret turned to Cabinet Creations for the custom storage solutions found throughout the house, including convenient drawers for everything from dishware to spices, sliding panels to corral cleaning supplies and tall closets that maximize space.

Son Oliver’s room is filled with toys and books to encourage play and thinking. Designed to grow with him, the room even features a desk that can be raised and lowered as he gets older. A feature wall showcases pottery that Margaret and Adrian have acquired on their travels; the opposite wall is accentuated by curtains made by Oliver’s grandmother.

With phase one complete, Adrian is focusing on growing his mechanical engineering business, 6 Machines. He currently works out of Perch Studios. In addition to teaching, Margaret also serves as lab director at UNC’s Child Imaging Research on Cognition and Life Experiences (CIRCLE) Lab. She and her team are researching the impact of early- life experiences on the developing brain.

When they’re not busy working or relaxing at home with Oliver, Margaret and Adrian enjoy dining out at Lucha Tigre, Pizzeria Mercato and Lantern, or grabbing a pint at Beer Study or Steel String. They also appreciate Chapel Hill’s proximity to Durham’s delicious downtown.

Although they did their homework before moving here, there’s one aspect of living near Franklin Street that Adrian and Margaret did not expect: the sense of community. “We have so many neighborhood gatherings and summer Friday happy hours. It’s so refreshing to know our neighbors – it’s something we haven’t had anywhere we’ve lived before.”