Joyous Cooking: The Other Pumpkin Pie 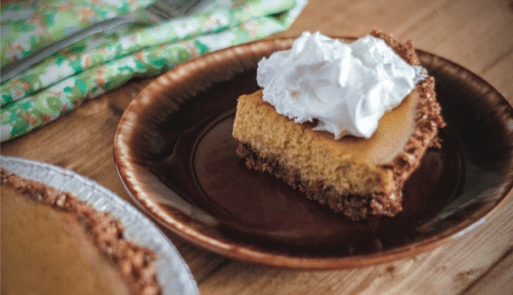 Until I spent my 16th Thanksgiving with Connecticut Yankees, I had never encountered a baked pumpkin pie. In the Deep South where I grew up, most pies were cold, fluffy and literally melted in the mouth. Black Bottom pie, Rum Cream pie, chiffon pies using various fruits- all were filled with a mixture called Bavarian cream, bound with gelatin. The same filling was used in charlottes, such as that incomparable Christmas dessert, Snowflake Pudding, flavored with coconut, then topped with a tangy raspberry puree to offset its sweetness.

Gelatin’s domain was not limited only to dessert back then. Tomato aspics, congealed beet or asparagus or avocado- grapefruit salads, cold consommé, and the sweeter jello salads with the gravity-defying fruit and nuts floating in the middle – all were common party fare. Main courses included jelled shrimp or crab salad, even “Tuna Mousse,” an ingenious way to gussy up canned tuna. The least appetizing was called, ironically, “Perfection Salad.” With chopped cabbage and green peppers suspended in lemon jello, this concoction was so far from perfect, it was usually left on the plate after one polite bite.

Nowadays, with the exceptions of panna cotta and (in some youthful circles) jello shots, you don’t bump into gelatin-bound dishes very often. Though I think of it as a quintessential Southern ingredient, gelatin has been pretty much ignored by the new guard of Southern regional chefs. As for myself, I can’t recall the last time I bought a box of Knox. But this Thanksgiving I plan to revive a delicious family tradition by making my grandmother’s pumpkin chiffon pie for dessert.

Soak the gelatin in 1⁄4 cup cold water and set aside.

Slightly beat the egg yolks and add them, along with the sugar, milk, cinnamon, nutmeg and salt, to the pureed pumpkin in the top pan of a double boiler.

Fill the bottom pan with at least an inch of water and bring to a boil on the stove. Place the top pan over it and cook the pumpkin mixture, stirring constantly, until it thickens slightly.

Add the gelatin to the pumpkin mixture and stir until melted. Chill the mixture only until cold but not set. Beat the whipping cream, and then the egg whites, until stiff. Carefully fold the whipped cream and the beaten egg whites into the pumpkin mixture until blended. Pour this filling into the piecrust and chill. Serve topped with more whipped cream, sweetened to your taste.

Mix ingredients together in a bowl. Press into a pie plate. Bake at 350 degrees for five minutes. Let cool before filling.

Moreton Neal is an author and interior designer who lives in Chapel Hill. She is a lifelong foodie, having co-founded LA Residence in 1976.