As a star of UNC’s 1957 undefeated national championship basketball team, Lennie Rosenbluth was never afraid of big games or big shots. But now, at 87, the Chapel Hill resident’s knees are not a fan of big stadiums.

“I think I’m the only member of our team who hasn’t had knee replacement [surgery],” Lennie says. “Even though it takes me a while to climb stairs, I’ll do it. Every home basketball game, every football game.”

It’s when the Tar Heels go on the road to bigger venues, Lennie says, that having osteoarthritis – or OA – in both knees makes him think twice about attending. The most common form of arthritis, OA occurs when protective cartilage wears down around the bones.

The pain it produces can be constant and even debilitating. And the supersized stadiums that now host NCAA Final Fours – and their supersized staircases, Lennie says – are not built for those managing OA.

“To be honest with you, when you get into one of these real big gyms, superdomes or whatever, if you have to go to the restroom, that’s a lot of stairs,” Lennie says. “At [the 2016 Final Four in] Houston, we were in the second row. We had great seats! But you turn around to go up, and you didn’t see the exit.”

Lennie’s wife, Dianne Rosenbluth, also has OA in her hips and knees, so it was a serendipitous encounter in 2016 when the couple met Leigh Callahan, the associate director of the UNC Thurston Arthritis Research Center, at a basketball-related breakfast hosted by Roy Williams. Leigh asked Lennie and Dianne if they would consider being co-chairs of the center’s Osteoarthritis Action Alliance, the center’s arm for public outreach and education.

Both Lennie and Dianne spent full careers as teachers, so the offer to help educate the public on the center’s work felt like a perfect fit.

“We talk about when you get older, if you have bad knees, you should try to do whatever you can do,” Lennie says. “Don’t just sit at home – get up and walk, and don’t let it stop you from doing things you used to do.”

OA affects almost 30 million adults, most older than 60, and as baby boomers age and obesity rates climb across all populations, that number is expected to surge. By far the most effective treatment, for both prevention and relief, is exercise, which the Alliance promotes through two programs: StandUp2OA and Walk With Ease.

StandUp2OA promotes advocacy and awareness, encouraging weight management and physical activity. Walk With Ease is a walking initiative designed for people who have arthritis and are not getting the recommended amount of exercise. The program includes online tracking tools for taking low-impact walks and help finding local walking groups.

After two hip replacements and walking on what she calls “half a knee,” Dianne says her OA hits hardest when she wakes up. 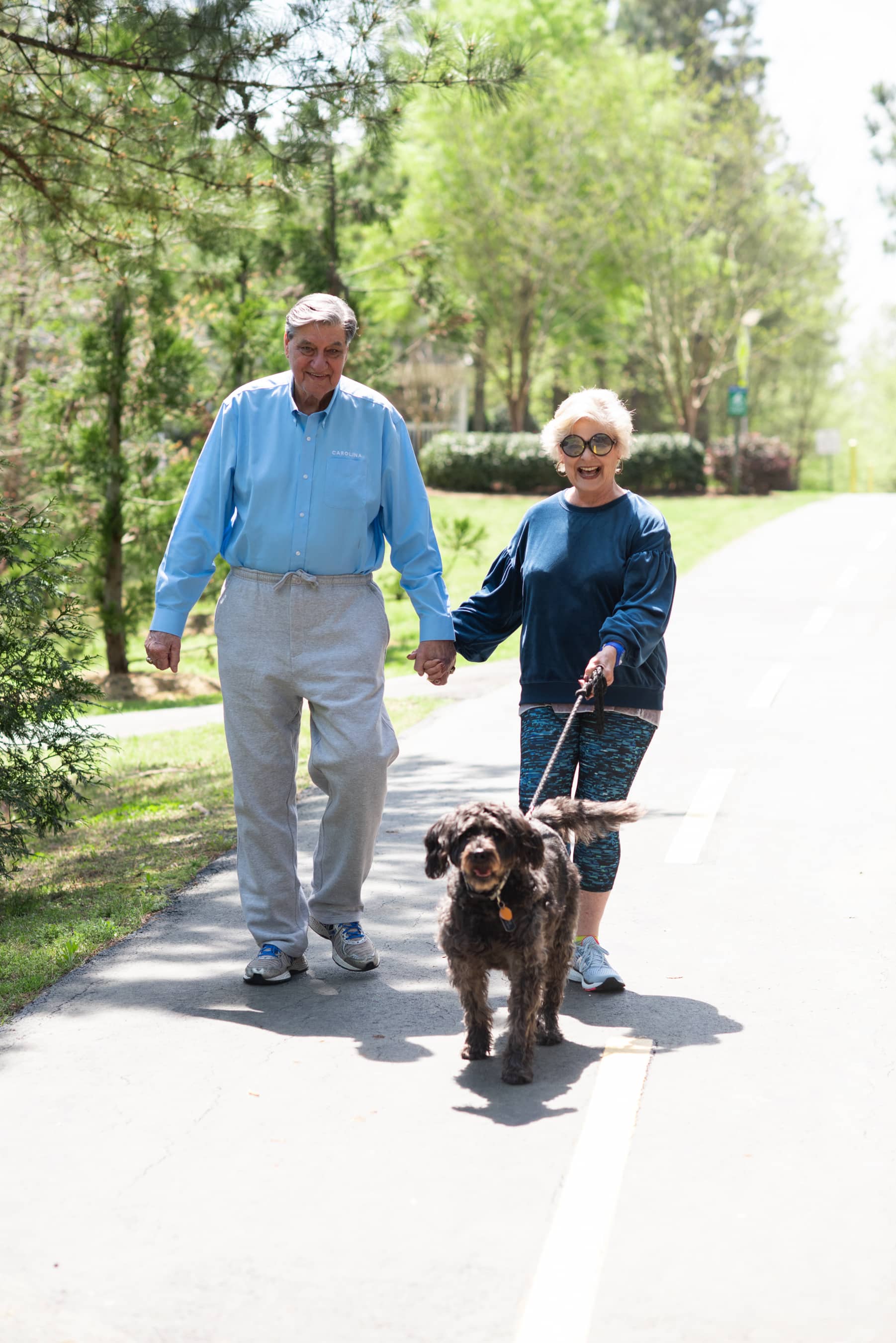 “It hurts like the devil first thing in the morning,” she says. But she’s learned a trick to make sure pain doesn’t derail her day before it starts. “I put my clothes [out] the night before,” she says. “When you get up, they are looking at you, saying, ‘You need to get yourself up and out.’”

After she’s up, Dianne says, she walks their dog, Luke, 1½ miles. She’s also joined UNC’s Walk With a Doc at the UNC Wellness Center at Meadowmont, a program where a group of walkers can stroll with a physician over a 1-mile course, asking questions about arthritis and health.

“People talk to one another, and it goes in no time,” Dianne says. “One morning I found myself walking with a woman I didn’t even know, and we did [the course] again because we enjoyed it!”

“Every Friday we go to Sutton’s for breakfast,” Lennie says. “And we go to Top of the Hill on Mondays for Roy Williams radio show. We don’t sit at home.”

Though UNC basketball has played 62 star-studded seasons since Lennie’s senior year, few players have left as big a mark. A Bronx native, Lennie averaged almost 30 points per game as a senior to lead the team to a 32-0 record, still the most wins without a loss in NCAA history. In the national championship, Lennie and the Tar Heels beat the University of Kansas and its superstar, Wilt Chamberlain, in triple overtime, and he is one of eight players in UNC history to have his jersey retired. He’s also in Israel’s International Jewish Sports Hall of Fame and, in the U.S., the National Jewish Sports Hall of Fame and Museum. He was inducted along with the likes of Howard Cosell and Mark Spitz.

He sees the campus with different eyes these days.

“When I was at UNC, I didn’t know there were any hills,” Lennie says with a laugh. “Now it makes a difference.”

But, Dianne says, arthritis won’t stop either of them. “The [phrase] I like to use is ‘embracing it,’” she says. “It’s not gonna beat me.”