A Starving Teenager With a Rare Disorder And an Incomparable Strength 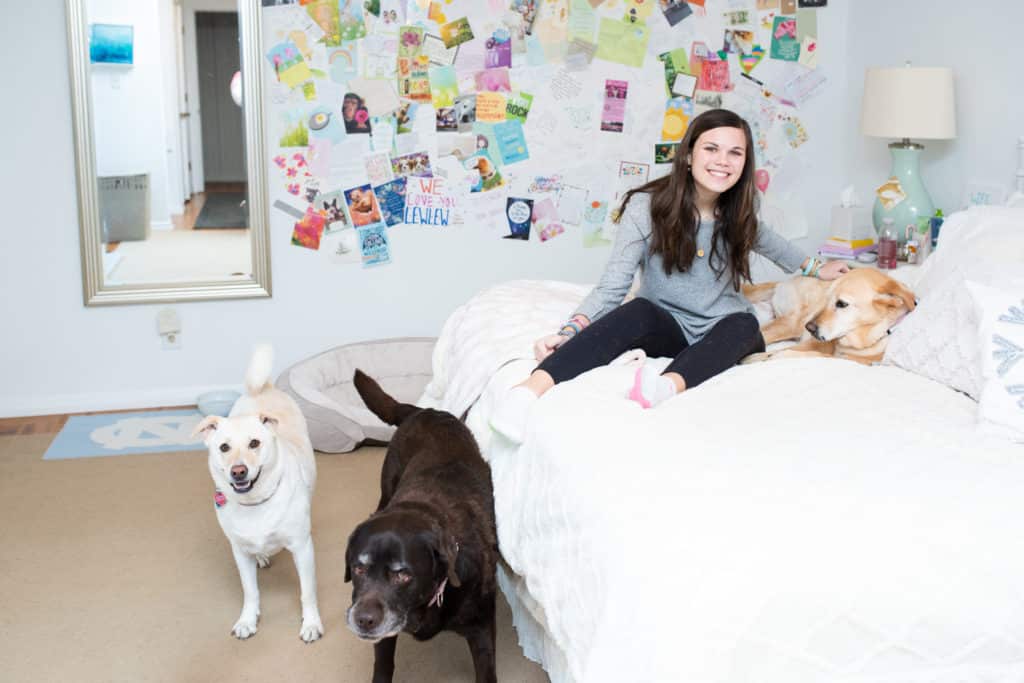 Have you ever woken up to the sound of your own screams?

LewLew Whayne has. And that’s the worst part of it all, she says. The other parts – the vomiting 50, even 60 times a day; the tubes and cameras running through her like a machine – were miserable, make no mistake. But the screaming, and the hopelessness that causes it, is something you never forget.

The East Chapel Hill High School (ECHHS) student lay in her hospital bed at Duke University in December of 2017 exhausted, but resilient. Her dark, drained eyes fluttered toward her father: “Did they find anything?” she asked, her eyes watering from the pain.

Hours earlier doctors had roused her at 5 a.m. to prepare her for an endoscopy. And if the thought of having a camera down her throat wasn’t terrifying enough, they would also snake a nasogastric intubation tube into her stomach.

Why was her body rejecting food? It had been this way for three weeks.

“I remember craving grilled cheese,” LewLew says about the memory. “I couldn’t even have an ice cube. I was mad because I had all these tests – and they weren’t painless.

“If I went through all this pain for nothing,” she says, trailing off. Then, she says, her dad told her they didn’t find anything.

An illness that she thought came from a stomach bug had quickly become a nightmare. Doctors prescribed her antibiotics, but by the second week she was still sick and was severely dehydrated. By the third week, she was in the hospital. She blinked, and her life as an AP scholar and varsity volleyball player had veered onto a new, unstable path.

The year to come matured LewLew in ways she couldn’t have imagined.

After multiple MRIs, CT scans, blood tests and stool samples, she was sent home with instructions to see a psychologist and take Lexapro, an antidepressant, along with other anti-anxiety medicines.

Even with a tube to feed her, LewLew continued to gag every day through December and January and often only bile. There was nothing in her stomach. Her face paled. She lost 20 pounds. And after several hospital visits, the doctors sent LewLew home in a wheelchair, this time with a different tube, but a tube nonetheless.

Though the tube fed her just enough to keep her alive, she still starved through that winter and spring.

During that first half of 2018, the doctors thought she must have rumination syndrome, a condition in which those afflicted repeatedly and unintentionally spit up undigested food from the stomach.

“Eventually they said that the only way that they could help is if I went to this therapist,” LewLew says.

Some doctors thought she had an eating disorder; the Whayne family rejected this diagnosis. But after a few weeks, LewLew dropped her resistance and saw a therapist, did progressive relaxation, acupuncture, even meditation.

“The one thing that did help,” LewLew says about the meditation. “I had chronic pain syndrome, so I was in pain everywhere just because I wasn’t moving a lot.”

But through it all, her family said, LewLew remained optimistic.

“We were all scared because we didn’t know what was wrong with Lew,” says Hayden, her brother. “But Lew had such a positive attitude the entire time. Every time she threw up she didn’t cry or anything like that, she was like, ‘Let me try this food, let me try that, let me keep trying.’ She was starving, but she was so positive about everything.”

That’s how she wants everyone to remember 2018. Not for the pain or the sadness that would sometimes overcome her at night or the frustration with the doctors.

Then in April, a breakthrough. The doctors ordered an esophageal manometry test, which measures the strength and muscle coordination of the esophagus during swallowing. She laid down on the exam table and drank a small syringe of water.

Up to that point, LewLew had not been able to eat or drink anything – not even a sip of water.

She drank the water. And she didn’t vomit.

“All of a sudden I had this ‘Aha!’ moment,” says Laura, LewLew’s mom. “I just watched my daughter keep water down! Because as a mom, hearing that your daughter is starving or thirsty or waking up crying because she’s so thirsty, to see that is terrifying.”

But the minute she sat up, the water came up.

“You’re not supposed to be able to eat or drink lying down,” LewLew says. “That’s weird. The doctors thought I would choke.”

For the next month, LewLew treated every day as a challenge. She tested her stomach’s strength with three peanut butter-and-banana smoothies a day while lying down. And she continued to do her school work at home, having missed the rest of her sophomore year – determined to not fall behind.

Meanwhile, Laura dove into research, refusing to give up. She knew her daughter’s illness was physical – not mental – so she kept asking questions. Her theory: Superior Mesenteric Artery Syndrome (SMAS).

So in late May, the Whaynes went to their friend, Dr. Michael Steiner, the only doctor LewLew would truly listen to. Finally, a doctor who would allow her to take the tests that would prove she had SMAS, which occurs when the duodenum (the first part of the small intestine) becomes compressed between two arteries.

In younger patients, SMAS most commonly occurs after corrective spinal surgery for scoliosis. But that didn’t apply to LewLew. It turns out, her superior mesenteric artery, the one that pinches against her intestine, swelled, blocking food from going into her stomach, like a kink in a water hose that stops the flow.

“I remember going into that meeting and expecting them to find nothing because I had gotten kind of used to that,” LewLew says.

But they found it. After six months, she had the correct diagnosis.

“It was kind of like a sigh of relief because I was told that it was due to my brain for so long,” LewLew says. “And then, they finally figured it out, and it matched everything that I was feeling.”

Dr. John Petty, a pediatric surgeon in Winston-Salem, agreed to do her operation the first week of September 2018. He moved all her organs behind the mesenteric artery so the organs could fit properly – he also removed her appendix.

And just like that, the SMAS was gone. But eating regular portions didn’t return so easily.

In the fall, she was strong enough to return to ECHHS for her junior year and catch up on Spanish, pre-calculus and multiple AP classes. But for breakfast, she could only eat a small cup of oatmeal, which would have to last her five hours – long enough for her to wait and eat again when she got home.

When Woody Durham, the longtime play-by-play radio voice for UNC basketball, died last year, LewLew thought of his wife, Jean. “I started making little paintings of angels,” LewLew says. “I was hearing other people were going through hard times and I was, too, so I thought that was maybe a way that I could help.” LewLew’s grandparents, Lynne Zimmerman and Bill Tate, are good friends with the Durham family, and LewLew gave Jean her first angel. 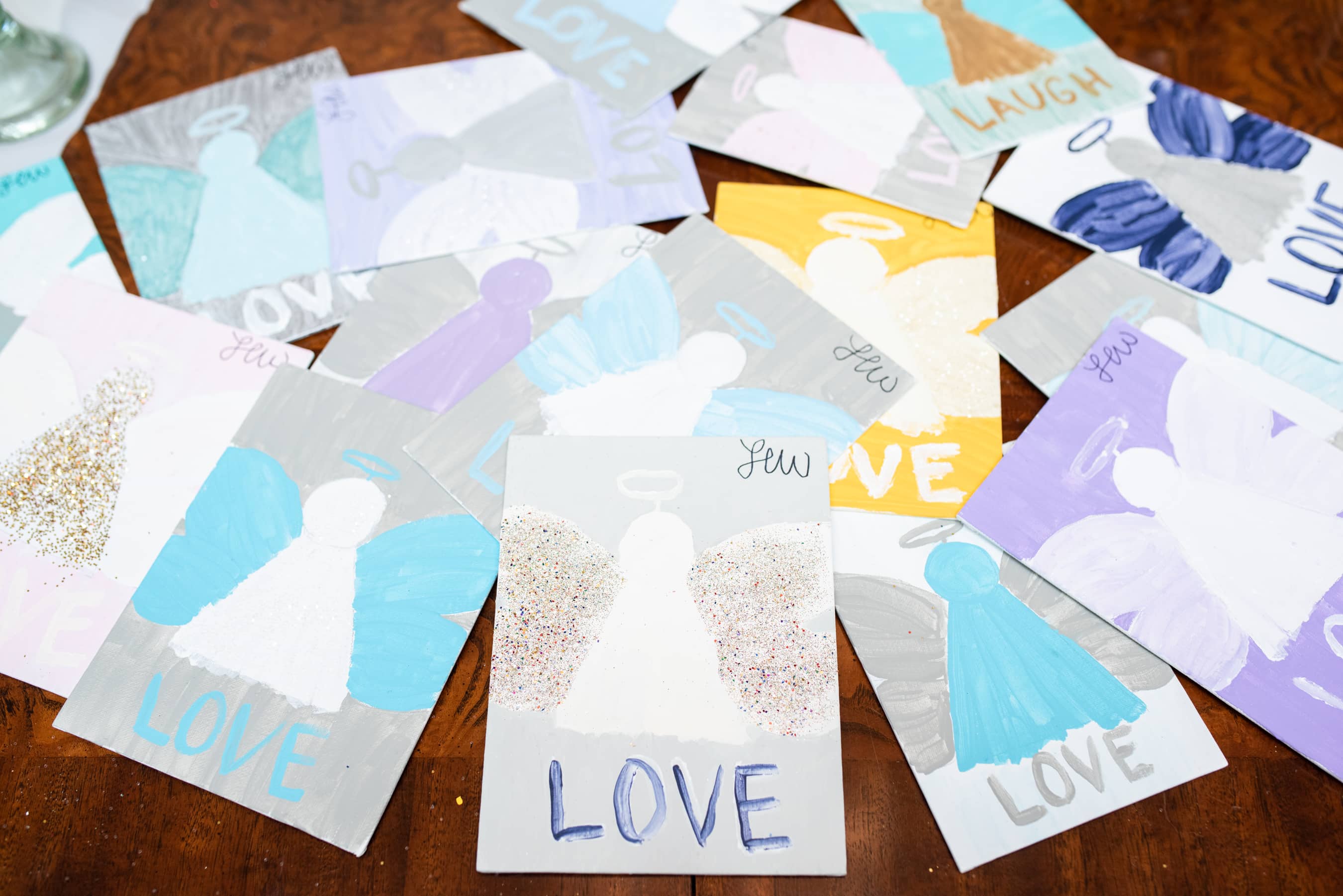 The hand-sized angels have spread throughout Chapel Hill and Durham. Now, LewLew gives them to anyone who needs an extra reminder of love. Though the 17-year-old is still struggling with the long-term effects of her illness, even post-surgery, positivity remains.

On January 25, she again found herself in the solemn white halls of a hospital, awaiting another surgery with Dr. Petty. Clothes drooped from her once-athletic 5-foot-7-inch frame, and she weighed 115 pounds, her lowest yet. He removed her gallbladder because it no longer worked properly and found serious issues with her duodenum and other areas. But finally, “She is fixed,” her mother says. “Dr. Petty saved her life twice.” After almost a month, she was discharged with another feeding tube and now takes injections twice a day to sustain nutrition.

Read the original article from the January/February 2019 Issue: